conform found a faster and sexier way using an algorithms from Jon Bentley's 'Programming Pearls'. At first I couldn't believe that it worked, because it was totally subtle, but now I buy it. See how to do this right at: http://conform.livejournal.com/36375.htm 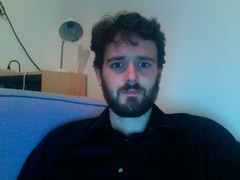 Meme me
Originally uploaded by pboothe.

"Take a picture of yourself right now. Don't change your clothes, don't fix your hair... just take a picture. Post that picture with NO editing. Post these instructions with your picture."

Crazy genius author (and Pomona professor) David Foster Wallace killed himself on Friday. I want to make a mean joke about a suicide note with lots of footnotes, but the whole thing bothers me a lot. I strongly dislike it when people who are incisively introspective and terrifyingly smart are unable to handle that which they discover.

There were four chocolates in the mix - one in chip form, and three others in chopped bar form. The chocolates were A) Dagoba Eclipse (87%), B) fancy schmancy Pralus, C) Callebaut chocolate chips, and D) Endangered Species Butterflies

The votes, transcribed exactly as people wrote them, went as follows:

From this we can conclude that the expensive stuff may actually be better, but all chocolate is loved by someone. And the people who like Pralus chocolate are both numerous and have very poor handwriting. The disqualified vote was Chris who wrote that he liked the chocolate covered espresso beans best of all, despite them not being eligible in the contest, as indicated by their complete lack of a single-letter name.

I turned 30 yesterday, and there was a huge party, in which I fully engaged geek social fallacy #4. And it was wonderful! I think that I will declare it to be the best birthday party I have ever had! I made a cheesecake, Tracy made a lemon bundt cake, and we had lots of chips and dip and a chocolate taste-off. People played Ricochet Robots (recently reissued, now available near you! It's as good a geek game as Set!), Perudo (with my brand new Perudo dice from Erin! She individually wrapped ALL 30 DICE), and Jenga. The last cubes of ice are only now melting in the sink. We were set up to serve 4 drinks: manhattans (the them of the party was "Manhattan"), martinis, not-quite-a-sidecars, and kirs. The last two were pretty darn popular, so here is the recipe for each:

Put it all in a shaker and shake vigorously. Strain and pour and garnish one of the cups with the bruised-yet-still-vibrant sprig of rosemary.

And here is the recipe for the kir:

Kir - not quite a real kir, apparently, but everyone loved them so that's good
1.5 oz Creme de Cassis
Soda water

Put ice in a class, pour the Creme de Cassis over it, and and fill the rest of the glass with soda water. Light and refreshing!

The chocolate tasting that single-blind, but everyone wrote their favorite on a piece of paper that anyone could read. So there were confounding social factors that prevent it from being SCIENCE, and merely make it scientific-ish. I will post the results later today, because the single-blind aspect of the experiment prevents me from knowing what chocolates a, b, c, and d actually were until Tracy gets home from work with the "lab notebook".

I hope everyone had fun at the party: I know I definitely did!

goteam and I just rode our bikes a long ways in the hot hot heat.

Now we are tired, yet happy.

Torture is not okay. Torture is, in fact, never okay. Which means that I read with ever-increasing disappointment the news that the current administration actively approved of and explicitly authorized acts which we have successfully prosecuted as war crimes in the past. This means that torture is not "a few bad apples", it is instead the explicit policy of the executive branch from the top down.

I worry that none of this would change under a President McCain. He had this big reputation as a straight-talker about 8 years ago, but he rolled over and advocated for the Military Commissions Act, which is a horrifically two-faced piece of legislation. It expressly prohibits torture by the executive branch and also vests the executive branch with total authority in determining what is and is not called torture. He also seems to have kissed and made up with the people who ran the awful race-baiting campaign against him in South Carolina in 2000.

This means that I read http://electoral-vote.com with great trepidation, because it's looking more and more like the Democratic party is tearing itself apart in an effort to lose the fall election by as much as possible. Bad domestic policy is yucky, and can take some investment and soul-searching to recover from. Bad foreign policy reverberates for decades and causes wounds which take generations to heal. And the past 7.5 years have been marked by some of the worst foreign policy I can imagine, and John McCain seems to be desirous of continuing the disaster. Kissingeresque realpolitik is one thing (it may be bad and morally reprehensible, but at least it has goals and examines outcomes), but this hasn't been that --- it's been divorced from reality. They've pretended that the world was the way they didn't want it, and then they took the steps that would be appropriate in this imaginary universe to fix the problem. Unfortunately, their mental map of the world has proven to be very different from the actual territory.

Anyhow, I was reminded of these fun facts by reading two things today. The first was from former Talking Heads frontman and all-around crazy genius David Byrne (BTW - David Byrne has both a blog and an Internet radio station and they are both good in that insane David Byrne way) and the second was Cory Doctorow's new novel Little Brother (available in full online at http://craphound.com/littlebrother/Cory_Doctorow_-_Little_Brother.htm ). When the zeitgeist is full of conspiracy theories and dystopias based on stupid responses to terror, this stuff just comes pouring out.

While I've opened the political can of worms, I thought I should plug my solution to ending the Iraq War in the most humane way possible:

First it was the threat of weapons of mass destruction, but the current raison de guerre is that we deposed Saddam Hussein to bring democracy to Iraq. Which succeeded — or, at least, a vote was held and people voted and got a purple thumb and then everyone went back to having a big ol' civil war. Let's hold another vote. I propose that this ballot will have a single question on it: Should the foreign troops leave within 1 year? 1 year is a nice round number, and it allows for an orderly goodbye. If they say yes, then we train people if they want the training, accept refugees if they want to come and be US citizens, and we leave in a year. We can even split hairs on whether it should be a year of the Islamic calendar or a year on the Gregorian calendar, but that ends up being a pretty small difference. That's democracy: people vote for something, and then the government does that thing (modulo various checks and balances).

By all accounts and all polls, this ballot measure would end up with more than 70% of the Iraqi population voting us out of their country. Why are we staying in a country that does not want us inside of it? We ``brought democracy'', and if they aren't free to vote us away on their own terms, it starts being colonialism and empire-building. (Sidenote: If we do stay, what is the end condition? Will we stay in Iraq until ``terror'' surrenders and we finally win the war?)

We may have broken it, but we do not own it. Iraqis own it. It is, after all, their country that we broke. Let's find out what they want us to do and then do that.

Nice video of a wally walk in progress:

Persopolis opened in Eugene at our local art-house theater. It's a fantastic movie, and a thinker of a movie. But it's sneaky, because it doesn't have the trappings of a thinker kind of movie, it's just that I find myself still thinking about it. Highest recommendations from both myself and

goteam as well as all of the Iranians I know who have seen it.

Perseoplis is going up against Ratatouille for "Best Animated Feature", and it deserves to win. Which is saying a lot, because Ratatouille was fantastic.
Rated: ★★★★
Collapse